Autonomous Vehicles Will Change Everything in the Next Decade-Right?

Autonomous Vehicles Will Change Everything in the Next Decade-Right? 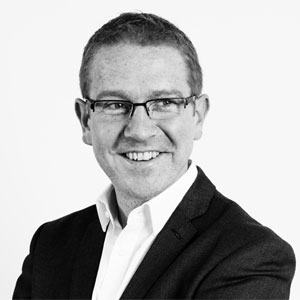 Tracking the developments in the field of Autonomous Vehicles (AVs) is a complex endeavour. At LMC Automotive, our goal–to produce responsive and focused forecasts for the automotive industry–requires a view on the most likely development path in this area. But there are a number of differences between this and our traditional industry analysis. One is that there is no historical precedent for this kind of technology change. Another is the vast array of information, much hidden by commercial sensitivities, to be tracked when forming a view. Even within the developing AV industry itself, there is a huge range of opinion on what is possible.

For automotive industry participants, planning for the large-scale arrival of high autonomy (vehicles at SAE Level 4 or above) is now a standing item on operational and strategic plans. At LMC Automotive, we have developed some basic principles to determine how this will play out.

One, accept that this technology change requires forecast scenarios for both timing of mass adoption of AVs and the numbers likely to be involved. Anybody offering confident forecasts on AV markets right now is either trying to fool their audience, or has already succeeded in fooling themselves over the certainty of their projections. Things will become clearer over time and this will allow for a narrowing of the scenario ranges. But it is prudent to have an open mind now, with views of the AV dreamers at one end of the spectrum, and the AV sceptics at the other.

Two, focus on and monitor the development of a large array of factors that will genuinely enable the uptake of AVs in the future.

Three, engage continuously with those actually creating technology and systems that will enable successful AV projects. Interestingly, in talking with technology, and particularly software, specialists, it is common to encounter a determination to succeed in AV development coupled with realistic expectations on the timeframes involved.

The organisational complexity of the holistic solution is daunting, which is why AV developers require considerable resources and partnerships to move forward

Four, maintain a live set of forecast scenarios for AVs, responding to new developments as they continue to come thick and fast.

Five, align a central forecast to our traditional automotive sector models, to account for the impact on non-high-autonomy vehicles. Once we have significant deployments of AVs, shared autonomous mobility is going to destroy a component of traditional owned-vehicle demand. In this respect, the impact of shared AVs is of paramount importance and a real focus of our analysis. The trouble here is that nobody yet understands how many owned vehicles will be displaced by each deployed shared AV. And this, therefore, means a few more scenarios are needed to capture low, medium or high levels of substitution. 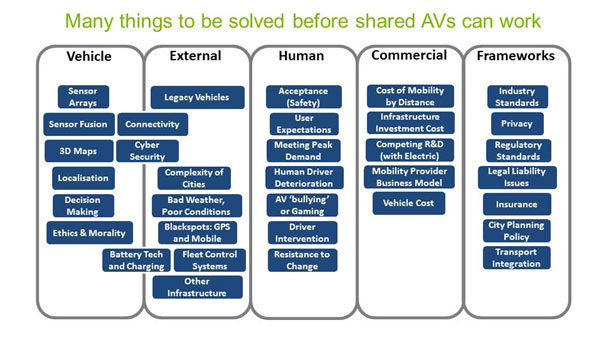 A sixth and final point is to retain some scepticism about claims that thetransformation is coming very soon. We have categorised the barriers to adoption into broad groupings, each of which has a number of critically important sub-sections. These are: in-vehicle technologies/capabilities; immediate environment external issues; the human factor; commercial considerations; and broad operating frameworks (see inlay). For mass adoption to proceed successfully, the majority of these issues must be addressed completely. Among the many items where we see potential for delays, some stand out: managing complex city situations (pedestrians, cyclists, unpredictable human drivers, etc.) without unacceptably hesitant or aggressive AV driving styles; meeting peak demand (if significant AV fleet redundancy is not available for peak times, shared AVs will not be widely relied upon as a core of future mobility); regulation (in the context of highly varied operating conditions, safety levels, differing rules-of-road road norms); agreement on ethics and morality of AV decision making (which appears under-developed at this point); required AV-supporting infrastructure (which can take decades to implement at scale); integration with public transport systems (also under-developed and still mostly envisaged in concept form); and human resistance to change. Other thorny issues will no doubt emerge.

The organisational complexity of the holistic solution is daunting, which is why, initially, considerable resources and partnerships have been required by AV developers to move forward, in stepwise fashion. In this way, the initial trials, running into thousands, not hundreds of thousands, of AVs will inform developers about how to do it. Eachiteration will provide learnings for the next stage.

So when you next see a media report that “Autonomous Vehicles have arrived” or that “The revolution has started” it is important to be aware that this will be just one of the earlier steps in an evolution towards a new form of personal mobility, likely to take place over a generation or more. If you have already seen predictions that the traditional industry will be swept away by AVs by the end of the 2020s, then perhaps take that with a pinch of salt. No doubt, we will see some impressive results, but it is likely that we will also see some significant limitations. It will be a long road.

How Path To Production Ensures Safety And Soundness On Our Digital...

Bringing People And Technology Together

Reaping What You Sow From Cloud Computing In Variable Industries