A Necessary Renaissance: The New Era of Task Automation 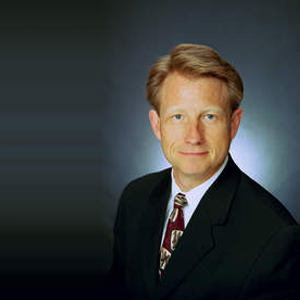 For the vast majority of people in the world, daily life was and is consumed with “tasks”. Advances in civilization have focused mainly on making our task lives easier, faster, safer or more profitable. The Industrial Era and the Technology Era alone have each enabled massive changes in world history, right down to the minutiae of our daily lives, like changing the thermostat. There’s been so many evolutions and revolutions in automation, you may wonder what more can possibly be changed?

The further automation of tasks will find its way into every nano-part of our lives. Will you always have to walk your dog? Or drive your car? When the cavemen slowly and laboriously carved on walls over 40,000 years ago they inadvertently created communication technology. Those innovative pictographs launched the sharing of ideas and information—and it’s been rocketing on an upward trend ever since. Along the way, most technologies that were born, also eventually were supplanted or died. In fact, most don't survive forever, no matter how earth-shattering an invention.

Technology has a distinct (and now very annoyingly speedy) life-cycle. Certainly many that were spawned in our lifetime have already gone by the wayside. Now we giggle when we think of a floppy disk, a VHS tape or a typewriter. Many technologies are expiring right before our eyes: Camera film, DVDs, and the wristwatch — despite Apple's attempts at re-imagining it (which isn't really a wristwatch; it's a computer bracelet that, ironically, is killing the wristwatch).

There are other, less obvious, tech fades in progress. When did you last hear a busy signal? Not the fast signal, but the "sorry dude, I'm on the phone with someone else right now" signal. Some of your children wouldn't know what that sound means. Even the once-ubiquitous dial tone has buzzards circling. FYI the dial tone originated around the turn of the twentieth century where it began as a signal that the line was operational. In the era of five nines, is it necessary? No. That’s why there is no dial tone on cell phones. But as some technologies morph or die, others sprout up to pioneer new improvements—and that’s where the story becomes interesting.

Let’s talk about modern history (defined as 1800 to present day). Here are the groundbreaking communications advancements and events in just the past two centuries:

But when we take a different view, the data show a clear trend:

Communications technologies are originating at a break-neck pace, making others irrelevant or redundant. Some technologies manage to hang on (like radio) while others have a really short shelf-life. For example, the Pony Express (with 184 rider stations strung out like a one-way relay team from Missouri to California) lasted only eighteen months. The extension of copper wire and the electric signal quickly out-performed it. The lesson for all of us is this: technologies today — which appear to be rock solid — WILL be replaced sooner than you think. 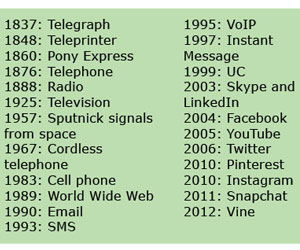 Consider Cisco, a 30-year old company. As a networking and communications technology leader, it has replaced its own technology many times over with new innovations. Cisco capitalized on the transition from Time-Division Multiplexing to VoIP. By contrast, a chief reason that century-old Nortel eventually wound down its business through multiple asset sales in 2010 was that Cisco was able to bring bold new developments in its field.

At no other time in history has change been so frantic and turbulent. People and organizations are being expected to adopt change as fast as it occurs. But the changes coming at us now have more to do with replacing human-driven tasks than with new techno-gadgets for people. In 1965 Gordon Moore predicted that the number of components per integrated circuit would continue to double until 1975. This became known as "Moore's Law". In 1999, Ray Kurzweil, futurist and Development Director at Google, extended this law into the future. Kurzweil studied adoption rates and showed that while it took 50 years for 25 percent of the U.S. population to adopt the television, it took only 7 years to adopt the web.

It appears humans are handling (and resigned to) technology changes. Now there is a new, necessary epoch developing: the epoch of automation. Maybe you’ve sensed it. How often do you think to yourself, "cool!" when discovering a new ability like talking to Siri or deferring to the artificial intelligence of a Nest to manage your home thermostat? You used to have to wait for the news (or dial 0 for operator) to find out the time and temperature, or walk to the thermostat to change it. Now you don’t have to leave your bed.

New technologies allow us to automatically manage how we receive voicemails, or which people are allowed to access us—processes that, years ago, would have required task-doers to intercede for us. Some recently deceased jobs include: gas station attendants, bank tellers, phone operators and (to some degree) cashiers and taxi drivers. The question of the self-driving car is no longer one of if. In a recently posted must-see video entitled “Humans Need Not Apply” CGP Grey lays out eye-opening facts about how robots have been proven to out-perform humans in many areas, even in jobs once thought untouchable.

So, the question on the lips of a CIO or IT exec is NOT “Should I be looking at more hardware or simpler software?”. It should be, "Am I automating my communication processes to their fullest?" Make no mistake: the communication technologies currently in place WILL die. But the winners will be those who take a lesson from history and look into the future with unblinking vision and see that it is all about the coming necessary renaissance: the new era of task automation.

The 5 questions you should be asking about legal tech

Technology as a Tool to Aid the Legal Function

Building On Your Legal Tech Journey

Enhancing Productivity of Lawyers with Technology